Pizza has been one of Stockholm’s stable foods, in each corner of the city a dodgy pizzeria has always been able to whip up a greasy pizza for that Sunday when you don’t want to leave the couch. A hate-love affair probably describes the feeling toward these places the best, but thankfully the year of 2015 marked a turn on the pizza map – quality pizza places popped up everywhere. And with the opening of several restaurants serving versions of the original, Neapolitan style pizza from Campania – pizza elevated to the next level. In this pizza jungle it’s about time to define the very best Neapolitan style pizzas we have in Stockholm right now.

So what the hell is a Neapolitan style pizza? In contrast to the much more common, Roman style pizza with it’s thin and crunchy crust you will recognize a Neapolitan style pizza by its thick and soft outer crust. But to get the dough perfect requires quite a lot of dedication from the pizza baker. It is far from an easy thing to get it right, but when you find that pizza baker who puts together the dough perfectly – well then you are in pizza heaven. Then it really comes down to the right ingredients, in everything from high protein flour to san marzano tomatoes to fiori di latte, and the right kind of oven that is able to blaze the pizza to that spotted, slightly charred perfection in the matter of seconds (check in the bottom of the article for detailed info*).

We have some seriously good pizzas in Stockholm nowadays but the delicate process leads to some challenges. The pizza quality changes a lot from one day to another at these restaurants, the tiniest changes in humidity, dough quality and oven temperature will significantly affect the end product and consistency is not guaranteed.

I’ll keep this list updated if any place pops up on my radar or any of the current places slip. Don’t be sad if your favorite pizza is missing, just send me an email and let me know which one.

So ladies and gentlemen, the best, Neapolitan style pizzas in Stockholm are:

Nobis Hotel and pizzeria Da Michele in Naples collaboration ended up with a pizzeria on Sveavägen, Pizzeria Giro. In the start Da Michele sent a pizza baker to Stockholm to oversee the operations, but as time has progressed they haven’t gotten it really right. The crust is a bit to low, the dough is still good – but the execution varies quite a lot in-between visits. But it is still better then most places in town. 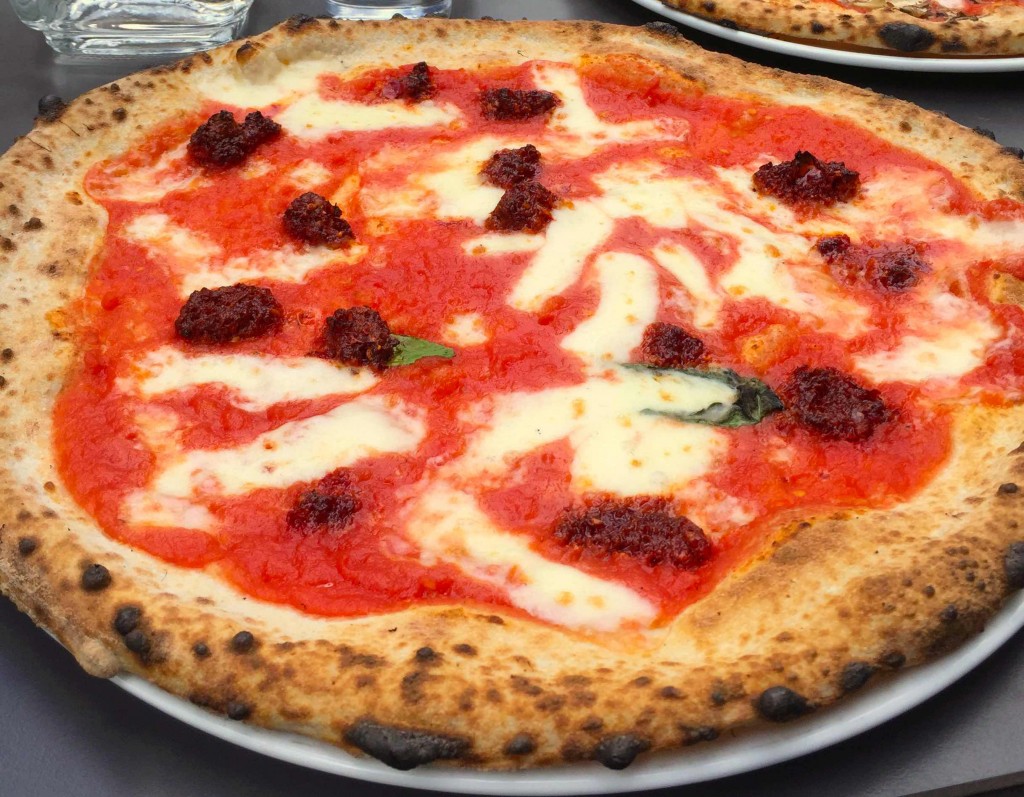 450 is a lead word for the oven temperature in Napoli. Incidentally, it is also the number of square meters that Paolo Roberto’s restaurant Pane Fresco is. And if you don’t take into account the huge and quite impersonal dining area on the top floor of the department store Åhlens City, and if you don’t bother to bring in service and the staff into the equation and only focus on the pizzas – they make the cut. And with good margin. The dough is high quality; the toppings are of equally high quality. The only downside is that they seem unable to consistently get the oven hot enough to get it perfect. 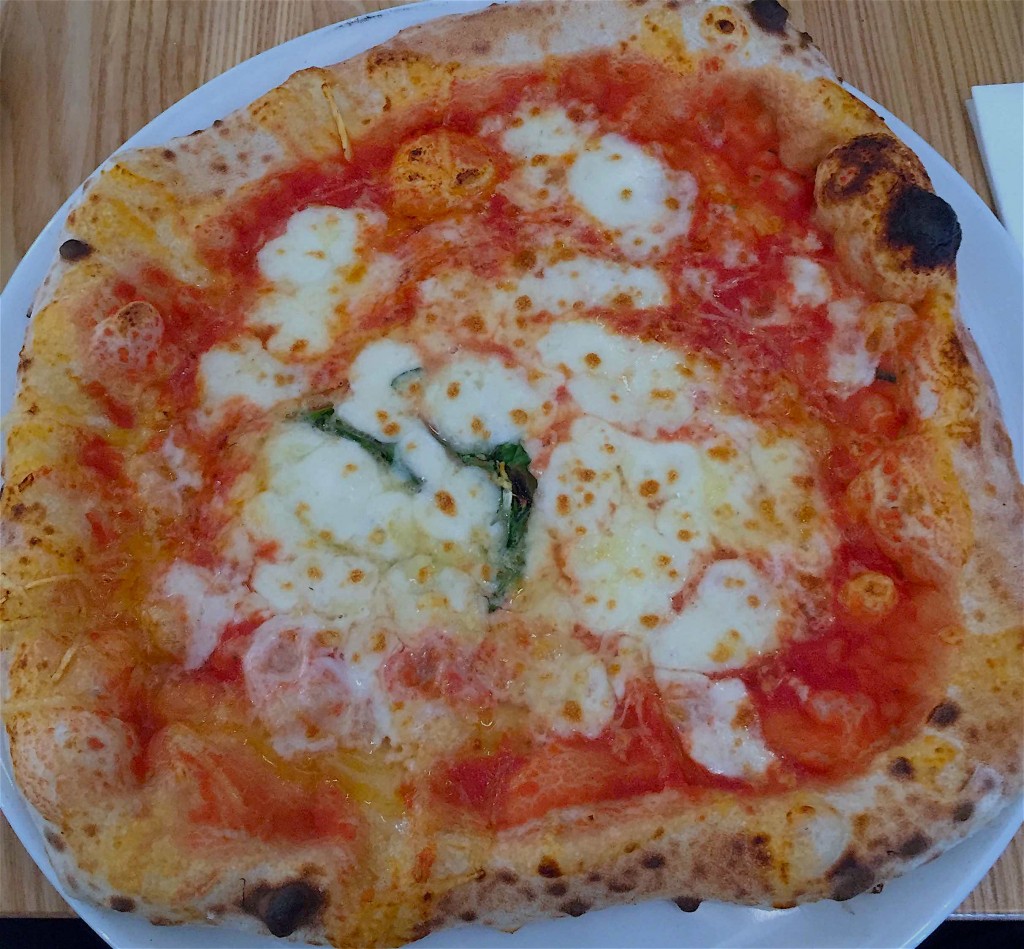 Ok, let’s get it out of the way from the get go. I wasn’t sure if I should even bring up Galinas Pizz on a list like this since they don’t produce the classic Neapolitan style pizza. But the dough here is spectacular! Galinas Pizza bakes their pizzas on a slightly lower temperature than normal in the wood fired oven, which gives the pizza a light crust on the bottom. Not crispy like a Roman style, but not as a classic Neapolitan either. But even so, the light and fluffy consistency of the dough gives Galinas a well-deserved third spot on the list. And apart from the oven temperature they do it more or less “by the book”. 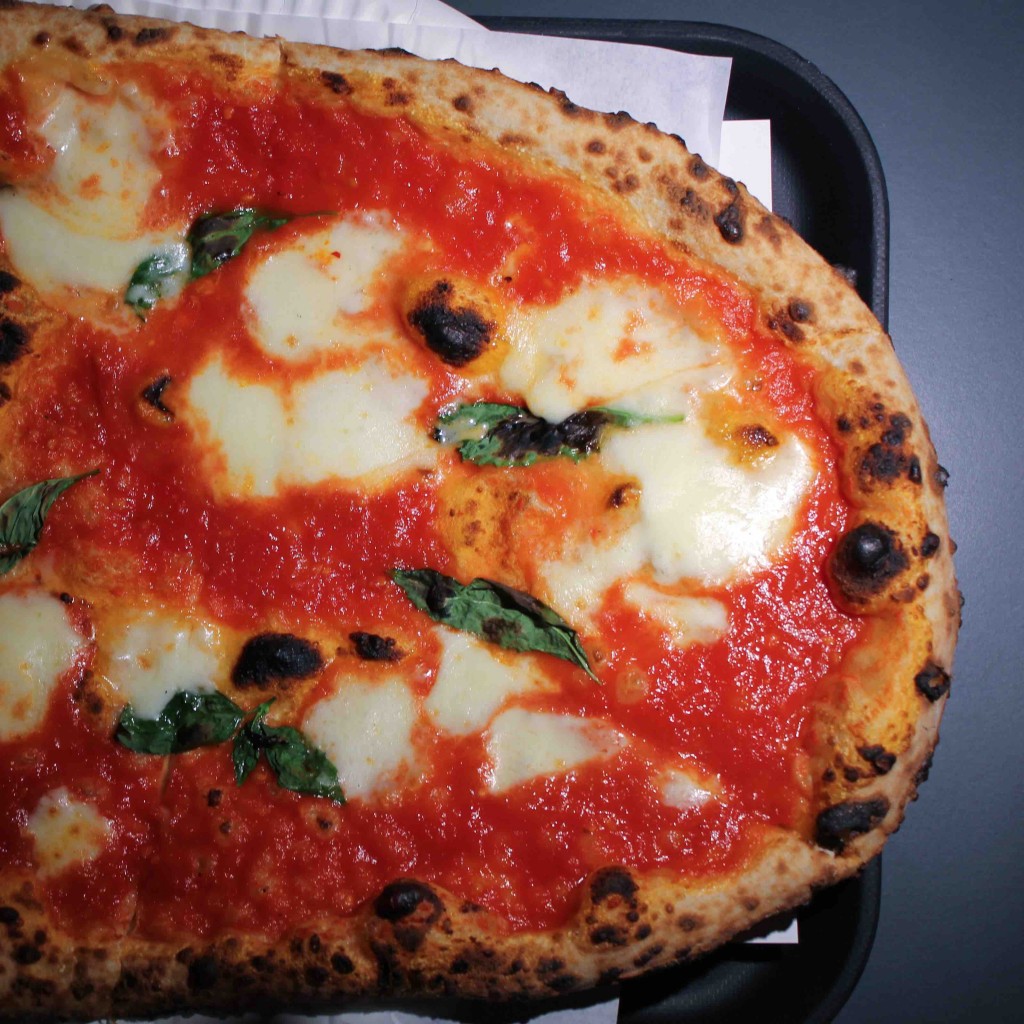 One of the most recent additions to the Neapolitan pizza scene in Stockholm Meno Male opened up in September 2016. The name roughly translates into Thank God – and that is the feeling you have when you eat the pizzas here. The dough has that nice elasticity and fluffiness. The wood fired oven is flown in directly from Naples and the toppings are of high quality. I’m sure they will fine-tune a bit more as time goes, and be a true challenger to the numbero uno on the list. 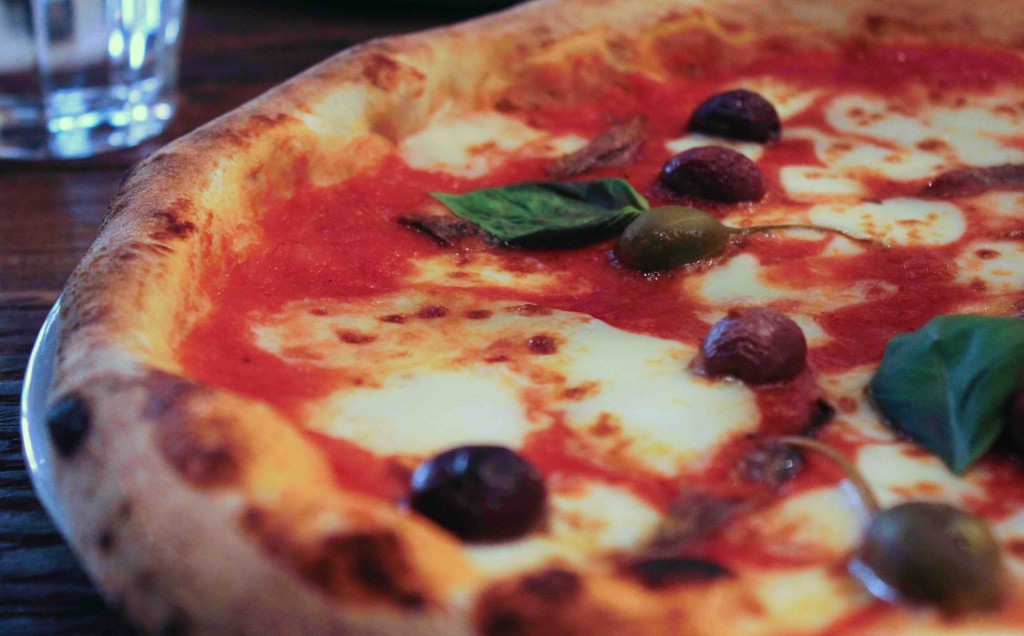 450 Gradi is the benchmark for Neapolitan style pizzas in Stockholm. The dough is nothing sheer of perfection; the oven is controlled throughout the day with a laser thermometer to ensure that the oven holds a consistent 450 degrees. And the oven is of course also flown in from Naples. Every detail here is cared for, the dough, the temperature, the produce and the output. Great place and a true gem in Stockholm, and if you are serious about your pizza – it is well worth the trip to Lidingö. READ MORE HERE 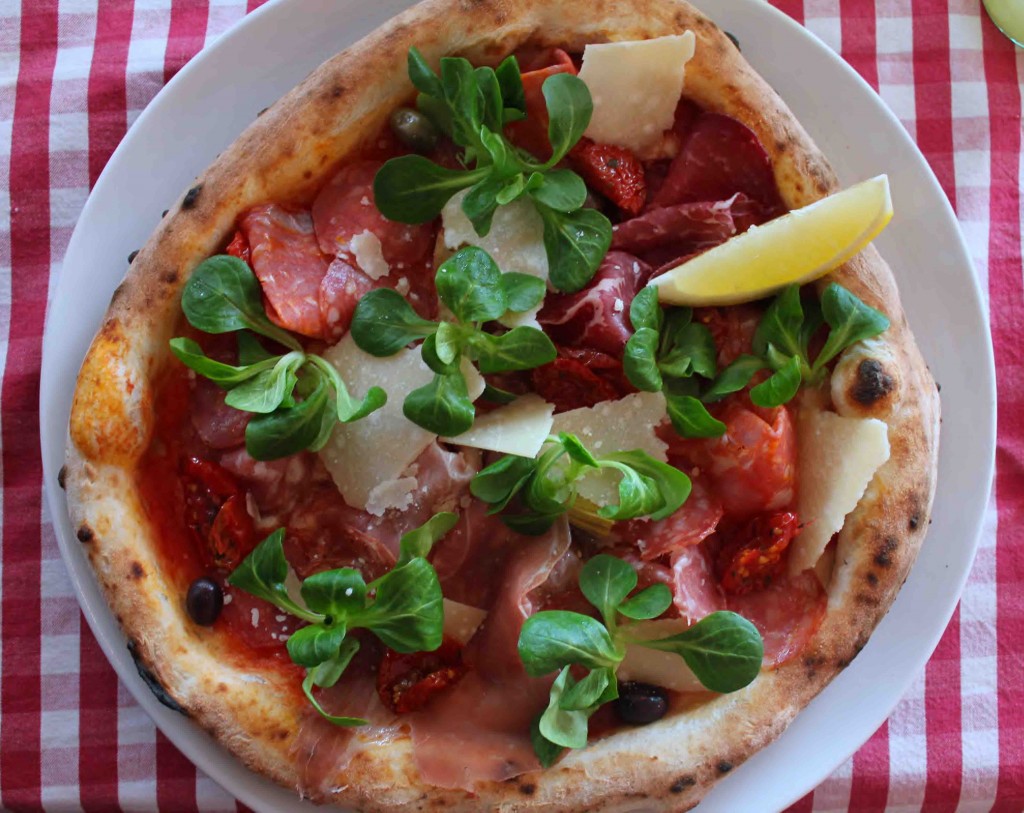 Jupitervägen 30
181 63 Lidingö
*Further info on Neapolitan style pizza:
According the the Associazione Vera Pizza Napoletana, the official association for this kind of pizza, the genuine Neapolitan pizza dough consists of high-protein, type 0 or 00 wheat flour, natural Neapolitan yeast, salt and water. The dough must only be mixed with a low-speed mixer, formed only by hand to a thickness no more then 3 millimeters thick and then finally baked for 60-90 seconds at around 485 °C in a stone oven with an oak-wood or gas fire. The ingredients for the pizza should further also orginate from the region and the classic version is a Margeritha with San Marzano tomatoes, Buffalo Mozarella or Fior di Latte from Campana, extra virgin olive oil and basil. A pizzeria can get officially verified by the AVPN but so far no restaurant in Stockholm has succeeded in doing that. There is also actually only one officially credited AVPN pizzeria and that can be found in the Falkenberg 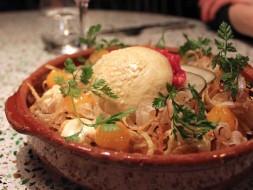 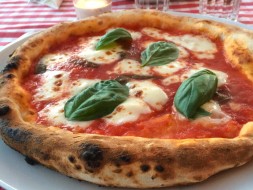 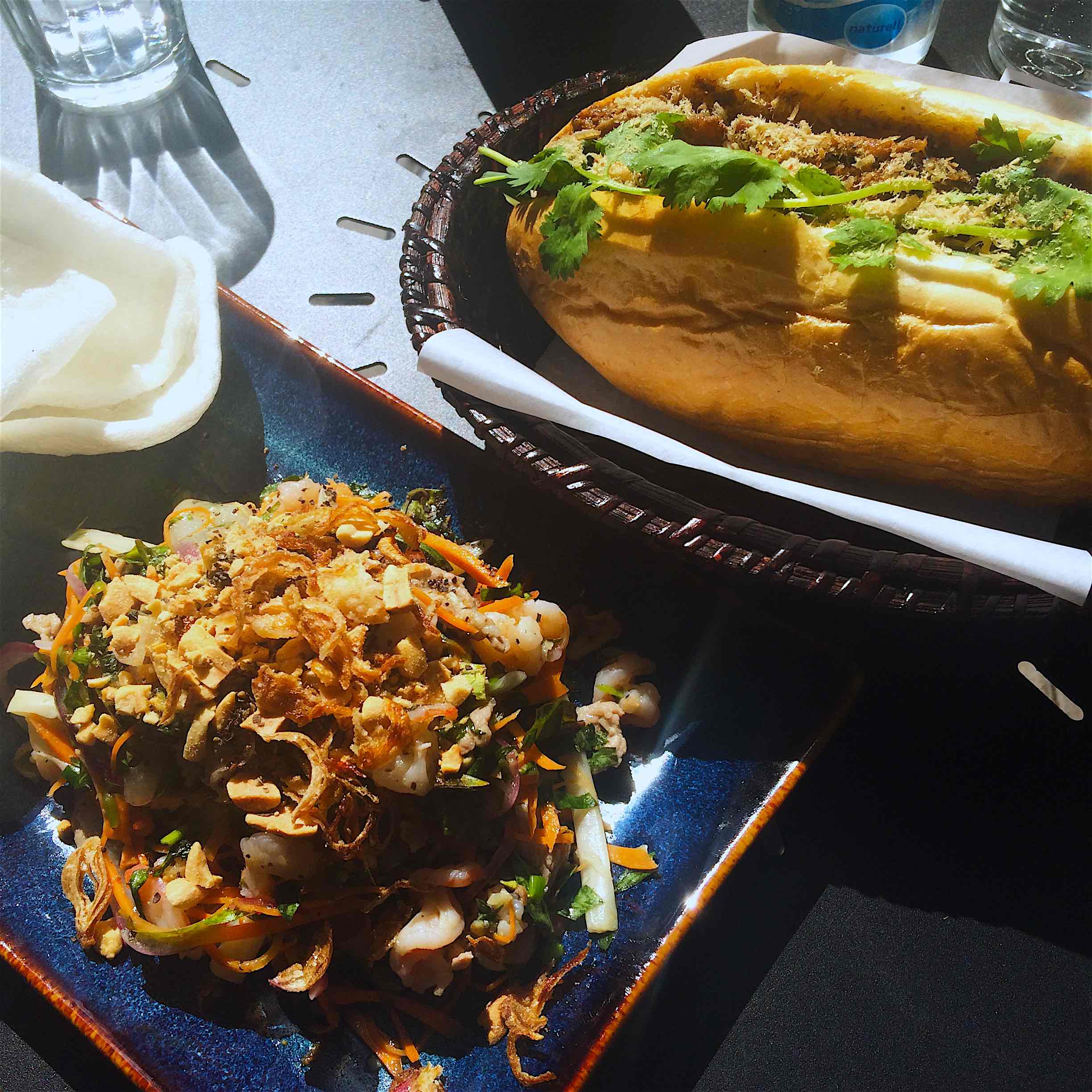